Bradbury only purchase grade 1 and grade 2 willow clefts in the raw form, the Merchants, mainly in the UK.   Willow is graded numerically by the Merchant, after which Bradbury re-grade into four levels, Exception, Players, Pro XI and Pro V. Once bats are completed, the final grading is based on performance, appearance and size. A fifth option is provided in the Performance range that includes willow from higher in the tree, containing over 50% red in the face.

The balance and pick-up of a bat should always be considered before the actual weight of a bat.

However: The actual weight of a bat is crucial in the case of younger cricketers who may not have strength that is proportional to their height. Light bats are highly recommended which is a difficult need to meet for two reasons. Firstly, the growth periods mean they may grow out of their bat sooner than a parent would like to invest in the next size up. Secondly, to make a lighter bat, the wood either has to be of lesser-than-average density, or the shape must remove more weight. Both these options do not support bats that last for many years.

Many shops display the weight of bats to help with selection. BUYER BEWARE- some shops will support the practice of a company that believes the weight of a cricket bat does not include the grip and the labels. These two items add anywhere between 2 and 3 ounces to the bat. So a young player in need of a 2.7 oz. bat is actually dealing with a bat of 2.10 oz. Furthermore, this practice is sometimes stated as industry standard, when there is no such standard, simply one company that due to its sheer size and market power can do what it wants. Do not be fooled when you see a number of “brands” employing this strategy, as this particular company own a number of brands. This practice is certainly not supported by Bradbury cricket.

Bradbury sizes in protective and accessories are as follows: 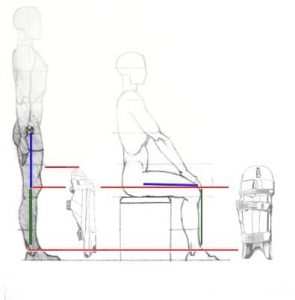 New sizes labelling has been adopted that are non-gender specific. All senior bats are regulation size, there is no “regular” label for standard size, the industry refers to this as a SH, or short handle. Other sizing descriptions in cricket bats include “long handle” which is an additional 25mm (1 inch) in length, or “Super short” that is 25mm less. Blade lengths are described as normal length, with short blade, and long blade used to describe the differences.  A trend for T20 cricket amongst professional players is the Super short blade, with long handle.  The overall length from toe to top is the same as a SH bat, with the shorter blade compensated through a longer handle. The width of the blade is a standard 4 1/4 inches, or 10.8mm, for a standard senior bat. This width decreases for junior sizes.